Church of the Exaltation of the Cross

Church of the Exaltation of the Cross is a valuable architectural monument. It was built in 1762-1774 in srict forms of ancient Russian churches of the 17th century. It was built by Egor Dubov (according to the inscription on the western fasade of the church). The painting of the walls was finished in 1807. 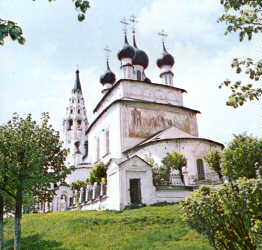 The church consists of four apartments. The main of them is the largest the highest and the lightest of all. Two more apartments were attached to its sides. The fourth one is in the upper part. The Bell Tower is connected with the church by the parvis. The walls outside are white and smooth. They are decorated by modest brick ornament. On the eastern side of the main apartment there is a fresco. The foundation of the Bell Tower is squared while the rest part of it is tall and eightsided with marquee top. According to the traditions of the 17th century the Bell Tower is decorated by colourful tiles. 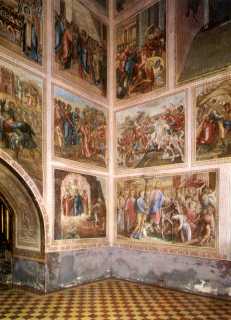 Inside of the church we can see fine paintings. The walls of it were decorated by frescos fulfilled by Palekh masters.These paintings were made under the head of the Sapozhnikovs. They were some brothers, owners of icon-painting studio in Moscow. On the walls we can see the numerous compositions taken from print of Veigel Bible illustrations showing a whole Bible history. In the arch you can see a traditional God Savaof and angels around. Lower you can see the paintings of the creation of the earth, the vegetable and animal kingdom and the man. The paintings are fulfilled in blue like a cloudless sky.

The next circle reflects the Fall and Banishment from the Paradise. Then you can see the scene of sinners torment at the Doomsday. Lower you can see some highest ecclesiastics confirming the canons of Christian faith. Just opposite the entrance you can see scenes from the Cristos's life. 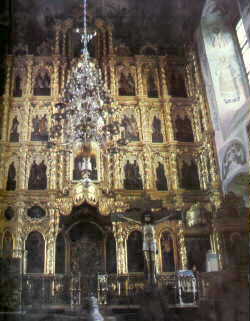 The design of the interior ended by smaller iconostasis in two circles and rich decorated one is in four circles in the church. The large iconostasis cut of wood and covered with gold is put to the wall deviding the summer church and altar. It is painted in the style of Russian baroque of the middle of the 18th century with some decorative elements of rococo. The icons of the upper circles go back to the 18th century but in the second half of the 19th century they were repainted. The icons of the lower circles remained as they were. They are fine samples of the 18th century Palekh painting.

Iconostasis in the southern and nothern apartments were painted much later. The Holy Gates of 16th century are the most valuable in the southern apartment. According to the legend they were brought from Uglich. Iconostasis of the upper apartment is painted in the style of classicism of the first part of the 19th century. The walls of the church are covered with a rich collection of icons which are believed to date to different periods of ancient Russian history. The most ancient of them is hagiographical icon of St.Nicholas brought from Novgorod in 14th century.

At the second half of the 19th century the icons were repainted in oil. In 1907 the frescos were restored. Since 1936 the church has become a branch of the State Museum of Palekh Art. In 1958 the painting of altar were cleaned and some petty losses renewed.