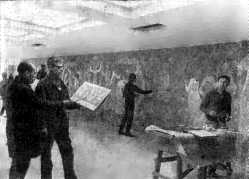 Equally with art miniature monumental decorative painting takes a great place in Palekh art. Such first works as a Room of Fairy tales (brigade under the head of A.V.Kotukhin) and A.M.Gorky's Room (brigade under the head of I.V.Markichev), both in Leningrad Pioneer Palace were fulfilled in 1936. Later on the Palekh masters painted the walls of the houses of culture, rest homes, cinema theaters, some children and public institutions and so on in different towns. The themes of such paintings were connected with literature and fairy tales.

The technic of this painting is believed to date to ancient frescos. In practice the oil wall painting is not strong. So the Palekh masters used egg emulsion in this case just as in miniature. The air comes through egg emulsion, it doesn't form a pellicle, plasters doesn't absorb it and ties together organically with it.

Before wall painting they do fine-grained plaster which is smoothed carefully, treated by glass-paper and covered by egg dilution on which the colours are dissolved. Having drown the sketch the painting is divided into checks and in such a way they transfer a design on the wall.

The process of painting begins with roskrysh of colours by bristling and polecat brushes. All elements are put delicately and transparently by the method of lessirovka light and coloured elements at the same time. Then they begin the drawing of common contours of clothes, their folds and contours of the rest things and their details.

The next stage is to shade slightly it. Special roscrysh of tones strengthen the shade, gaps (probels) put and some separate details are drown (leaves on the trees, waves on the water and so on). Everything is done in the manner of icon-painting. The details are worked in three tones. They use gold there very rare.

The heads of the people are drown by lessirovka beginning with putting sankir (it is put only on shaded part of the head). Then hair is covered by needed tone half tone, then the rouge is covered. On the light parts of the face they put body colour. And at last on the parts coming forward they put patches of light. Everything is covered with thin layer and lessirovka so that every detail must turn smoothly one after another without distinction. The master must do everything quickly while the colours don't become dry. Having put the tones the head and hair are drown.

Wall painting drown by egg colours is not fixed. The older the colours the stronger they are on the plaster.