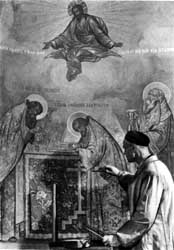 Palekh masters began to restore wall painting at the end of the 19th century. Before the revolution they restored frescos in many town cathedrals. Among them there were frescos of Assumption Cathedral in Vladimir, Sophy Cathedral in Novgorod, Cathedrals of Novodevitsy Cloister and of Rogozhsky Cemetery in Moscow, Ipatyevsky Cloister in Kostroma and others. The best restore masters of that period were I.V.Belousov, F.I.Antonov, I.V.Markichev, I.P.Vakurov, A.I.Vatagin, A.A.Dydykin, M.V.Dydykin, A.P.Parilov. After the October revolution frescos of the Moscow Kremlin Cathedrals (Archangelsky, Annunciation, Assumption) and the Trinity Cathedral in Zagorsk were restored. The best restore masters of that period were N.M.Parilov, G.M.Melnikov, G.K.Bureyev, A.V.Borunov.

Before the revolution the restore masters fastened the plaster, cleaned the painting from soiling and painted the places dropped. It is known that the dropped places they had to paint obligatory as it was considered the church decoration must be completed.

Nowadays the requirement to restore works has changed. Now they must not only fasten the plaster but also take away the layers but the first painting and the dropped places are painted by needed tones.

The process of restoration consists of some stages. The first stage is to fasten the plaster layer. The fastening begins from the lowest layer and gradually transits into dome. In those places where the plaster has come off they drill an opening and with the help of the rubber pear they pour a solution of lime and casein into. Then the plaster is pressed by the leaf of veneer. Between them they put a layer of cotton-wool. Then they let it alone for 3-4 days. After the plaster has pasted the cracks are cleared and puttied by lime puttying. If they meet large holes they clear the brickwork first, drive nails into, put steel, the nails are interlaced by the wire and only after it they put plaster on.

On the second stage they take off dirt and soot. If there is only one layer, they wash it by soap water. Then they put tones on the lost places and re-establish the painting just in old limits by egg tempera with formalin for desinfection and strengthening the paint.

If the painted layer is crumbling, the whole surface is treated by egg emulsion which form a protective pellicle. To strengthen the painting layer it is rolled by rubber through tracing-paper. After drying the process is repeated (washing, toning, fastening).

For taking off the latest oil paint layers they use different dissolves (smyvkas). They usually use acetone for this or concentrate liquid ammonia compresses. After making the oil paint softer it is taken off carefully by scalpel layer by layer. If the oil layer is very thick it is not softened by smyvka, it is warmed by the help of electric stoves done in the form of shield with a handle. When the first layer is opened they re-establish the plaster, small and large losses, make tones, add and strengthen the painting.

The work in Lacquer Study of Monplaisir Palace in Petrodvorets in 1955-1959 was a special type of restoration.