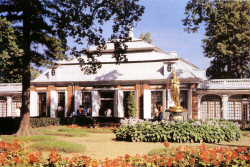 The Monplaisir Palace is one of the rest Peter I Palaces that had kept its outside and inside look without changing just up the Great Patriotic War.

The construction of the Palace began on May 17, 1714 by the prominent architect of the time I.Braunstein. It was built in 1722. The Monplaisir Palace was the most favourite Peter's palace that's why the architects paid the greatest attention to its decoration. The Lacquer Study is an important structure of the Palace. It's the first room in Russian Palaces which interior strikes by amazing and colourful decoration. There are 11 large vertical panels of two metres high, with 11 smaller horizontal ones above and under them. There were smaller vertical panels between each of them. Every panel was framed by wooden carting covered by gold. There were some small shelves with Chinese and Japanese porcelain. The details were decorated by lacquer painting. Some compositions were very complicated and you can see nothing twice. 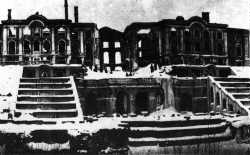 During the Great Patriotic War the Palace was destroyed. The town itself was free from Nazi Troops only on January 19, 1944. The nazi turned much of the Palaces into ruins. Thousands trees in the Park were cut down, some statues by Samson, Volkhov, Neva and tritons were stolen. A unique monument of Russian 18th century architecture seemed to be lost for ever.

The restored commission considered the Palace to be hardly rebuilt but the Lacquer Study because only three damaged panels from 78 of it were left. The scope of complex restoration work was coped with by the Leningrad Special Scientific Restoration Shops supervised by architect A.E.Gessen. The work began in 1953 and it was on for 10 years.

The Lacquer Study continued to stay with bare brick walls. Black and white photos that remained in old books couldn't help in restoration. They couldn't give an idea of colour and texture of painting. The origin of the Study itself was a mystery. It was only known that in different times it was named differently: Japanese, Chinese, Lacquer. The mystery was found in the archivist documents. They were a contract with painters I.Tikhonov and P.Fyodorov from 1720 and a document of fulfilling the work by them in 1722. At that time Russian painters only began standing the secular painting having been icon-painters before. It made to invite Palekh masters.

A.V.Kotukhin was the first to invite there. Having examined the remains of the original panels he found out that it was done of lime-tree and painted in the manner of icons. Palekh masters knew that technique very well.

A group of miniature lacquer painters from Palekh, headed by the Merited Artist of the RSFSR N.M.Zinovyev began to restore the Study. In the group there were such old talented painters as A.V.Borunov, T.I.Zubkova, G.M.Melnikov and some young painters as V.V.Bolshakov, Yu.A.Vinogradov, V.N.Smirnov.

First they began to study the documents and photos of Chinese things from Peter I Palaces. They were helped greatly by M.N.Krechetova, a manager of Chinese department in the State Hermitage.

While searching N.M.Zinovyev began to restore three remained panels. G.M.Melnikov found out the mastic for relief. The Merited Artist of the RSFSR N.V.Dydykin helped and consulted the work. He fulfilled the first copy of one remained panel. In the restoration work they used a large Chinese carpet of the 18th century from the collection of the State Hermitage. It had numerous pictures of birds and animals which the painters needed in painting of smaller panels. A whole album of drawings was done. The panels were painted by the most talented masters of the group. They were N.M.Zinovyev, G.M.Melnikov and A.V.Borunov.

Copying Chinese painting on black lacquer boards in colour and composition was the next stage. In such a way the painters studied a new manner of painting. During the process of painting they decided one task more. They had to work out a composition of one of the panel as they had no its photo.

33 panels were done on papier-mache plates in scale 1:3. It became clear at that moment that the Lacquer study would be restored.

To fulfil the panel in relief and in natural size was the last stage. N.M.Zinovyev was both a headmaster and a painter. In 1959 the restored works of the Lacquer Study were finished. The Monplaisir Palace was renewed in the whole in 1963.